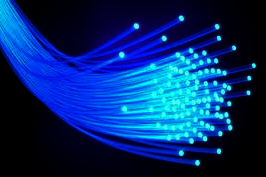 A C Networks will install singlemode and multimode fibres, OS1,OS2 9/125, OM2, OM3, OM4 50/125, and OM1 62.5/125, these can be internal fibres within a building or external fibres to link two buildings together or multiple buildings on a campus site.
Terminations can be LC, SC, or ST.

• SPEED: Fiber optic networks operate at high speeds - up into the gigabits
• BANDWIDTH: large carrying capacity
• DISTANCE: Signals can be transmitted further without needing to be "refreshed" or strengthened.
• RESISTANCE: Greater resistance to electromagnetic noise such as radios, motors or other nearby cables.
• MAINTENANCE: Fiber optic cables costs much less to maintain.

Single mode optical fibre also known as SMF is designed to carry only a single ray of light (mode). Modes are the possible solutions of the Helmholtz equation for waves.
These modes define the way the wave travels through space, i.e. how the wave is distributed in space.
Waves can have the same mode but have different frequencies.
This is the case in single-mode fibre, where we can have waves with different frequencies, but of the same mode, which means that they are distributed in space in the same way, and that gives us a single ray of light. Although the ray travels parallel to the length of the fibre, it is often called transverse mode since its electromagnetic vibrations occur perpendicular (transverse) to the length of the fibre. We perform all connecting terminations with the latest Fujikura splicers. We can test and audit your existing fibre optics connection for signal losses or breaks.